Relics of Padre Pio & St. Leopold Mandic On Display in Rome for Veneration 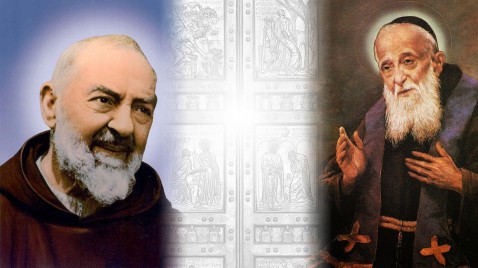 At the request of the Pope, the relics of Padre Pio and Saint Leopold Mandic will be in Rome from February 3rd to February 11th for the commissioning of the Missionaries of Mercy on Ash Wednesday for the Jubilee Year of Mercy, February 10th.  This is the first time the relics of these two contemporary saints, both renowned as confessors and spiritual guides, have been brought together for veneration by the public at the same time.  It is a particularly unique event as the relics of the wildly popular Padre Pio rarely leave the shrine at San Giovanni Rotundo.

Padre Pio was a Capuchin Monk born in 1887 in Pietrelcina, Italy.  Like St. Leopold, Padre Pio suffered physical maladies and was sickly throughout his life.  In 1918 he had a vision of Jesus while offering the Mass and when it ended had the stigmata in his hands, feet, and side. Padre Pio became renowned during his lifetime for his abilities and people came from all over the world to have him hear their confessions.  At his urging, the House for the Relief of Suffering, a 350 bed hospital was built.  The relics of Padre Pio are on loan from the Shrine Monastery of St. Pio of Pietrelcina in San Giovanni Rotundo, Italy where they are available for veneration by the public.

St. Leopold Mandic was born in Croatia in 1866 but spent most of his life in Padua, Italy.  He was plagued with disabilities and malformities in speech and stature that lead to the development of his immense spiritual strength.  He became known as an Apostle of Unity and of Confession.  He was a Capuchin like Padre Pio and also shared his devotion to Mary, whom St. Leopold called his “Holy boss.”  He died in 1942 and is known, along with Padre Pio, as a saint of Mercy.  The relics of St. Leopold are on loan from Church of the Configuration Shrine of St. Leopold Mandic in Padua, Italy where they are available for veneration by the public.

Please make sure to check the website for the most up to date schedule and any special requirements when making your plans. Large crowds are expected to participate and some may require advance tickets.

Padre Pio and Saint Leopold, pray for us!

February 7-9, 2016
Saint Peter’s Basilica
Exposition of the relics for veneration by the faithful