With All Souls Day coming up, I thought I’d share one of our daily prayer activities for the Holy Souls in purgatory. We have what we call a ‘purgatory box’, which is a box full of the names of those that have died that we want to pray for.  You could include any or all of these as you choose. 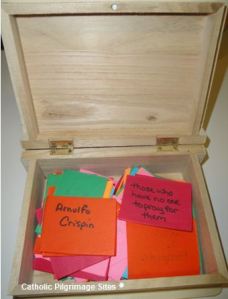 To create the purgatory box we used a craft box from Michaels (which as you can see I haven’t gotten around to decorating, but that’s not the important part) and some color copy paper to put the names on.  We choose the box instead of a basket or something else because we can close the lid when needed to keep kids and pets out.  We took the colored sheets of paper and folded them in half and half again until we got the squares you see in the photo and used a black marker to write in the names, one name per square.  We like to draw the names randomly from the box and the color paper doesn’t bleed the names through like the white paper does.  The darker the colored paper you use, the less the black marker bleeds through.  We add people to the box as needed.

Every night for around 10-15 minutes we each pull a name from the purgatory box and say the St. Gertrude prayer out loud and add “especially [name of person whose name that was drawn]” and then the next person draws a name. We go through the whole box in a couple of nights and it’s a great way to pray as a family. The best part is the 1000 souls that are released from purgatory each time you say the prayer!

Eternal father I offer unto Thee the most precious blood of thy divine son Jesus
in union with the masses said throughout the world today
for all holy souls in purgatory, especially [insert name you drew here]
for sinners everywhere
for sinners in the universal church
those in my own home
and in my  family
Amen.

Like Loading...
This entry was posted in Catholic Pilgrimage Sites and tagged All Souls Day, catholic, prayer, Purgatory. Bookmark the permalink.